I hope you’ve all kicked off 2K14 with a bang! We’re nearing the end of January now and the ‘New Year’ feeling has pretty much almost worn off now. Funny how we’re only a month into the New Year, yet it feels like it has been so much longer! Guaranteed the British weather contributes to that sullen atmosphere, that has been experienced this month! This time last year the UK was covered in a pretty, white blanket of cold, fluffy snow yet January 2014 has been wet, wet, wet!! (and well, pretty damn miserable).

Due to the rather unfriendly weather we’ve had recently I’ve not been able to get out much with my camera. To be honest the start of 2014 has been a bit of a disaster for me. Physically i’ve not been well, due to my mental illnesses it’s been having a bad effect on my physical health and am now suffering with heart problems and exhaustion. So even when i’ve wanted to, i’ve not had the greatest amounts of energy to get out on walks with my camera. Despite this, no amount of exhaustion has stopped me being able to get out on some occasions, where i’ve managed to snap a few photographs along my walks in the South East.

One of my New Years Resolutions was to aim to get outdoors for a daily walk each day. I find walking very therapeutic and aids well to my mental health recovery, so I thought it would make a good resolution to get outdoors for walks more often. I need to find a new walking route, but I never fail to go via the beach when out on a walk. There’s something to calming and peaceful watching the waves, the dog walkers and the sensation of the fresh, sea breeze. 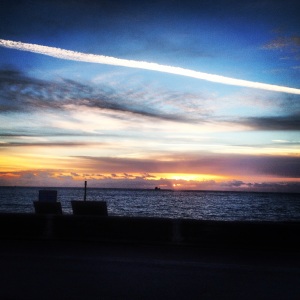 Could almost imagine it was Summer time
from the warm and sunny colors of the wintry sunset.

Taking a final moment to throw it back to 2013 with one of the final photographs I took last year,  one of which I absolutely adore. The colors and beauty of it, to me connotes Winter as a season.

On the plus side of life, I’m (officially) no longer a teenager! Me and my twin sister celebrated our 20th birthday last week! Due to mental health reasons, it wasn’t a very fabulous day but I believe there may be a mini trip to Spain on the cards soon (oooh photographical opportunity) to visit my uncle, so maybe that’ll make up for it! Just pass me a couple of glass’s of Sangria and i’ll be fine!

I may be 20 years old but no one can resist the infamous Caterpillar Cake!

I shall wrap up January’s blog here. It’s been short and sweet, hopefully I’ll have more to share in next months blog. I’m struggling right now, but am trying to power through with life! It’ll be a significant year for me this year, one of which I’m feeling quite apprehensive about but I shall be taking each day as it comes… with hopefully a smile on my face!