Beyond The Walls: My First Camp

Having joined the Circle of Life team on an internship, Marina and I agreed that the best way to truly understand the work that I would be promoting would be to submerse myself in it. With the first camp of summer fast approaching, it was decided that my latest camping experience since Cubs would be located in, hopefully-not ironically named, Battle. Memories of unassailable tents and chillingly awkward wash basins preoccupied my thoughts. Upon meeting the team, all apprehension was somewhat dispersed and instead I was feeling remarkably content – despite still being plighted by my tent pitching skills. A whistle-stop tour of the camp ensued, while also dabbing my hand at some fire-making, before an overview of the timetable; one of the few but precise staff meetings that enabled such a fluid running of the camp. And so, I was left to tend to the fire while the greeting party was sent to the coach, periodically poking the burning branches, I sat as the previous apprehension rose back up, before the voices of twenty young men began billowing through the woods. So it begins. 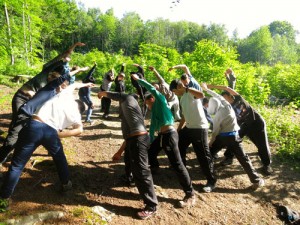 After the melee of tent-picking and bag-dropping, we were able to gather round the fire for some introductions, with the members of staff up first my response (mostly made up of assurances that anyone new to this was not alone) was delayed having momentarily forgotten that I was said staff and not a participant. Introductions over and responsibility resumed, the team fanned out into a clearing to get in to some team games. While cliques were evidently in place, you could already begin to see communication and teamwork developing among boys who otherwise wouldn’t, in a classroom environment. It’s here that the first theme of the John Muir award could really be seen: Discover. You can expect a trip like this to evoke the discovery of new surroundings and characteristics you were otherwise unaware but of relationships, and the willingness to develop them, among already familiar acquaintances was a surprise for me. As the afternoon moved to evening, the boys were required to help out with building a sweat lodge, dormice houses and safe fires; split among the newly discovered ‘clans’. The aforementioned teamwork was now being applied to a productive medium, facilitating the safe and efficient use of otherwise dangerous tools. A quintessential motive considering the backdrop. With the days duties over, attention turned to dinner and then some more games but this time incorporating camouflage, requiring an awareness of the surroundings; something that was the theme of my bed-time ponder – that and why it is that all tents seem to smell the same. It is the awareness of the natural world that can beset the most divine appreciation of it, when you appreciate the world around you, you can be nothing but content; even when you have forgotten your pillow. 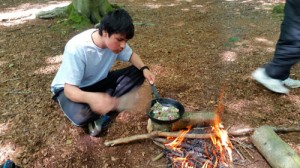 Feathers and Marina performed the wake up call, Tunkashila is a song of awareness, consideration and gratefulness. This surreal commencement of the second day set the tone for what was surely going to be a tough one for the boys, with just how much activity was planned but the message was to stay aware and stay focused. The continued timetable of physical exercise woven with educational crafting was the order of the day once the morning duties were completed. It’s this balance of leisure and education that allows Circle of Life’s work to be so unique. You can’t just jump up in class and launch a frisbee around when you’re not feeling engaged. By the early evening, we had a finished sweat lodge, eight Dormice houses, hand-made atlatls, foraged, prepared and cooked nettle pakoras and a lesson on safe fire extinguishing for good measure; all by early evening. By the stage of preparing the fire for the sweat lodge, attitudes had become spiky and requests began to be ignored, so a short break and a staff check-in allowed a momentary rest bite enabling the camp to remind ourselves of todays message of gratefulness. Queue the sweat lodge. All pessimism was left outside of the lodge, the boys were left with only their minds to explore, allowing compassion to blunt the edges of the spikes that had feebly threatened to spoil the days energy. Instead, the groups appreciation of the lives they lead was complimented with well-wishing for those not as lucky and, through self-exploration, the group were able to incorporate the days message into their approach for the rest of their time at camp; and hopefully daily life. Again, exploring the natural world can be expected but to explore ones self to such a degree can be a profound lesson. 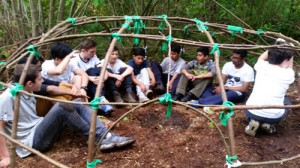 After a night spent round the fire as one group, typifying the events that preceded it, Sunday’s duties were resumed and then it was all about enjoying the moments we had left in light of our experiences so far. Once the tents were taken down and the bags packed, the group set about putting up the Dormice houses, excited at the prospect of aiding in conservation, it served as a fitting precursor for the eventual wind down and farewells, each group able to make their contribution, symbolising their time at the camp; before my favourite event of the weekend. The sit spot. Taking a moment out and finding a secluded spot to reflect on all that had happened, all the growth I had witnessed and all the contemplation I myself had endured, I was able to truly quantify the magnitude of natures power. Its ability to transfuse the peacefulness and tranquility into a scope for rationalising thought is a truly wonderful gift, a realisation that I will never forget. As the group rejoined, we headed to the yurt for the final exchanges, each member bringing a gift to give to another, on top of what the camp had already gifted us. Having discovered, explored, conserved and shared, it was time to wish the boys well and say our final goodbyes, ending what was yet another successful camp for the ever-deserving Circle of Life team as the boys were adamant the learnt lessons would be influential in their daily lives. 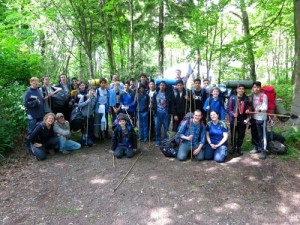 With the most important part concluded, it was time to contemplate what I had learnt; that being just what an inspiring gift the natural world can be. It is a strange feeling finding something that had never actually been lost.

Visit our gallery for a closer inspection of the weekend’s events: https://www.circleofliferediscovery.com/index.php?page=tiffins-camp-2015

Or our YouTube channel for some responses to the time we shared: http:/www.youtube.com/watch?v=x_mdfm9Yp6Y