When I ask my children why they would rather watch TV than go outside, they say that television is more fun. But what is fun for a 3 and a 5-year-old? Their tastes are hugely influenced by my tastes. They emulate me, poor things. And I love screens. So when I complain about the barriers that stop them from playing in the big wide world, could it be that I am the problem, or at least a big part of the problem?

Indoor activity has evolved quite a bit since cave painting. Bad entertainment ideas like El Dorado [link https://www.youtube.com/watch?v=RIP4QeIkXfw] have died off, and through a natural selection process we have been left with the screen content that does its job best. But what job? 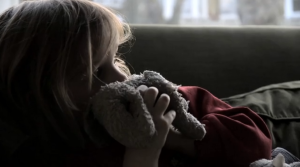 TV shows or games that survive the media jungle are those with the power to hook in the greatest audiences. It is widely accepted now that what brings in the audiences is content that fires up emotion in viewers.

Agnes Nairn co-authored a UNICEF report that judges the UK harshly as a difficult place to bring up happy children. She says, “There is no evil marketeer sitting in a boardroom, stroking a white cat and plotting how to monopolise children’s brains”. Rather, she says, the whole system incentivizes the production of addictive content.

Addictive content is the stuff that best triggers our hottest emotions – our so-called ‘fight or flight’ reactions. The endorphins that we release to respond to fight or run from stress are very addictive. In the wild, the release of such chemicals is usually followed by intense exercise (as we escape the lion). In front of the television, this state is maintained for hours on end with no accompanying exercise. We are designed for flight of flight. But we need to recuperate from it. So when I turn off the television, my 3-year-old son usually reacts angrily. He is ready to punch me for denying him the fix.

So if screens are drugs, should we go after the manufacturers and suppliers, or the users? Should we start a war on screens? No – because, like a war on drugs, it will not work. Whatever the local rules, content is now a democracy and you can get your violent video game, or latest episode of Downton Abbey (they both push the same buttons) on demand on the Internet.

So whilst we could ban or regulate child-directed media, we would, I believe, get further by dealing with the addicts, like me. Spending hours on screens leads to more hours on screen. The stressed physical state means less sleep, and less energy for other activities. Going outside is pretty tough work after TV. So children do less outside and do more television and games.

Just 20 years ago children used to play out a lot more. 40% would regularly play in natural places. Now only 10% do. That is why I have appointed myself the marketing director for Nature. Because I figured Nature needs one.  The sales of outdoor play to children have fallen off a cliff, while sales of screen activities have soared. Disney and Nintendo have eaten Nature’s breakfast. They are well on the way to winning the battle – and making outdoor play fully redundant.

I am making a cinema documentary about the loss of connection between children and nature. I want to know if it is possible to ‘sell’ the idea of the outdoors to children. Can we beat the screen content providers at their own game?

We have almost finished the film. We just need to shoot some final scenes. I am not giving away anything to say that I failed in the initial plan. We just could not get nature’s message heard over the racket made by billions of dollars of marketing budgets. But is has made me take a more subversive route – using guerilla marketing and crowd funding. That is why we are on Kickstarter. It is a platform where people pledge money to help complete the film, market nature, and in turn get rewards – like a free download of the finished film, tickets to the premiere, producer credits.

If this sounds interesting, take a look at www.bit.ly/projectwildthing for more information.

We have to do something to persuade ourselves, and our children that there is a whole world out there – outside of screens – that is rich, varied, stimulating, healthy and free. That is my sales pitch. Do you buy it?