This way of life is based on observation of energy movement and how the energies are related. By developing this understanding we begin to see creation as the movements of the Great Mystery. We can witnesses the creation born off of the Great Mystery in the wheeling of the stars, the beauty of a sunrise, the song of the birds, and the movement of the seasons. It is all becomes an expression of the Mystery.

This knowledge of energy movement isn’t just applied to the world of nature but also the world of humankind. We understand human nature by this same perspective is a manifestation of the Mystery. Human beings are part of the creation so how could this not be true.

The ancient stories of creation that we still hold speak of major cosmic events which long ago altered the dynamism of the Earth. These alterations and combinations changed the context of the earth reality and through the process, re-ordered the previous reality.

These stories tell about a time of change which blessed all females of the Earth with a number of “gifts”. These gifts are process which occur internally within woman, so sometimes they are called internal ceremonies.

Just as any gift from the celestial powers, there comes great responsibility with these gifts. Each of the gifts are about continuation of life, as it is with anything in nature. This means that women hold very specific responsibilities to ensure the regeneration of life. These gifts make women the conduits of life; the door keepers, if you will.

The 4 gifts to women also created certain life stages that occur naturally and are marked by physical changes in a woman.

The gift and physical change that we will focus on is the menses, often called Moon Time. The Moon Time begins when a woman has her first menses and ends at menopause. Each month the cycle continues during this entire life stage, only divided during times of pregnancy and lactation.

There are many variations of this how the Moon Time ceremony is conducted amongst indigenous people but they hold similar patterns. They often teach about how the young woman should remain healthy in the coming years as she develops into a mature 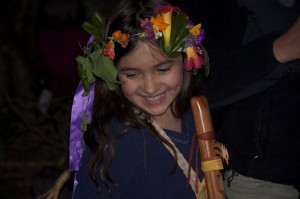 Ceremonies evolved in indigenous communities to meet various needs, based on a deep understanding of the natural energies of both men and women, and also two spirits (genderqueer).

The woman’s internal processes, which includes the menses, or what were called the Moon Time, were regarded as sacred ceremonies in and of themselves.  It was especially understood that a woman on her Moon Time is in a very powerful ceremony which can interrupt any other ceremony.  Women on their Moon Time are in a type of purification which needs to be respected.

There is a lot of confusion about this, even amongst traditional peoples.  Some people have created a view that women on their Moon Time are unclean and have manipulated this taboo in unhealthy ways.  This can create a sense of shunning or rejection, as if Moon Time is a punishment or curse.

The older belief holds that Moon Time and the menstrual blood is the manifestation of the unfulfilled capacity for creation.  It holds the female power of creation and the mystery.  The woman is the only one who can bring new life into the world.  A woman’s blood flow during her Moon Time is full of the mysterious power of childbearing.  To be able to create new life from one’s own flesh is incredibly powerful, even the most powerful thing possible.  Man can do nothing compared to this.  So we respect the power and all that which is attached to it. It is for this reason(s) that woman do not participate in many of the external ceremonial practices.

The Inipi (Sweat Lodge) workshops that we are offering welcome women and children.  In this tradition, if a woman is on her ‘Moontime’ she is considered as a experiencing her own ceremony, with it’s corresponding purification and connection attributes, so would not take part of the Inipi.